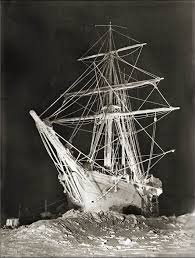 Instead, Endurance was frozen into the sea ice in early 1915 and was slowly wrenched apart over the following months. In November 1915, she disappeared beneath the surface.
Having survived for 15 months on floating ice, Shackleton knew he had to make contact with the outside world and organise a rescue, before the oncoming Antarctic winter. The best option was to reach a Norwegian whaling station on the island of South Georgia. Between it and Elephant Island lay 800 nautical miles (1500 km) of the South Atlantic, one of the roughest stretches of ocean on the planet. The most seaworthy boat was the 22 foot lifeboat James Caird.
Easter Monday fell on 24th April 1916. On that day, Irish revolutionaries rose up against the occupying British forces. Meanwhile, on the other side of the world,  Ernest Shackleton, Frank Worsley, Tim McCarthy, Tom Crean, Harry McNish and John Vincent set out in the James Caird for South Georgia. It was a visionary, if daring, undertaking – their resolve and boathandling pitched against the full fury of the South Atlantic.
Half of the crew was Irish (Shackleton, Crean and McCarthy).
For the following 17 days they battled overwhelming odds. The weight of ice on the boat threatened to sink it, 65 foot (20m) waves funnelling around Cape Horn assailed them relentlessly; working in two watches, they sailed and bailed for their lives. After 15 days, the impossible was realised – South Georgia was sighted. It was an incredible feat of seafaring and navigation under the guidance of an inspiring leader.
In low moments, the ballad ‘The Wearing of the Green‘ was sung to lift their  spirits; coincidentally,  the main character of this song, the United Irishman Napper Tandy, had been a pupil in the Shackleton School in Ballitore, County Kildare, Ireland!
Having made landfall on the inhospitable south west coast of South Georgia, Shackleton, Crean and Worsley crossed its mountainous interior to reach the whaling station at Stromness.
There followed three failed attempts to reach the remaining 22 crew on Elephant Island. Eventually, at the end of August 1916 ,on the fourth attempt, all were successfully rescued.