‘JamesCaird100‘ marks the centenary of  the voyage of the James Caird from Elephant Island to South Georgia, as the essential action in reconnecting the lost Endurance crew with civilisation, and ultimately the rescue of the entire complement. It also highlights the fact that half of the six crew on the James Caird were Irish, something not generally appreciated in Ireland or elsewhere.

The Shackleton Museum in Athy, Co. Kildare, Ireland, the locality of Shackleton’s childhood,  is to the fore in raising awareness of Ernest Shackleton and the contribution of Irish people to endeavour and exploration. A particular strength is the  innovative  ways is fulfills this objective. JamesCaird100 is a project in this creative mode.

The concept arose in October 2015 in a conversation. Kevin Kenny developed the idea and  discussed it with boatbuilder and sculptor Craig Blackwell who came on board immediately. Kevin and Craig had collaborated previously in similar roles with Shackleton’s Endurance, the graphics / narrative / musical retelling of the Endurance story, commissioned by the Shackleton Museum, Athy. The courageous and visionary voyage of the James Caird was a key action of the Endurance epic. It offered inspiration for a dynamic and unconventional art installation.

Research indicated that an exact replica of the James Caird would not work in terms of budget, time, and technical requirements. Much discussion ensued  on the concept of a ‘replica’, the role of a replica and the plain dilemma of whether it is possible to faithfully replicate an object and its meaning.

Craig’s pragmatic vision was to create something contemporary, with strong reference to the original object. With Kevin, the concept was evolved  – it would be a fibreglass boat, similar in general shape to the Caird; it would have a mock crew aboard – the James Caird was sailed in two watches of three, (three also represents the Irish complement); it would be a clean white boat with ghost-ship overtones, representing the mysterious ‘fourth person’, Providence, which Shackleton credits with guiding the boat journey and he subsequent crossing of South Georgia.

“When I look back at those days I have no doubt that Providence guided us, not only across those snowfields, but across the storm-white sea that separated Elephant Island from our landing-place on South Georgia. I know that during that long and racking march of thirty-six hours over the unnamed mountains and glaciers of South Georgia it seemed to me often that we were four, not three.” (Shackleton, ‘South’).

A  rowing boat was purchased in February 2016 to act as a foundation for the installation.

Further weeks of work followed – decking the boat, adding masts and rigging with the objective of minimising windage and making up anchors. Brendan Nash kindly offered to help out with a solar charged lighting system, based on Craig’s design using maritime navigation colours of green and red. 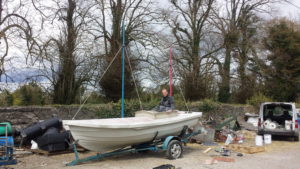 The final steps of painting the entire piece a ghostly white and adding Craig’s crew sculpture remained before the first outing as part of the launch of Butler / McCumiskey’s Shackleton – The Voyage of the James Caird (Collins Press)  in Athy.

JamesCaird 100 was launched on Monday, May 16th. All deadlines were met, and for her maiden installation, she was positioned, appropriately, on the River Barrow, directly across from the Shackleton Museum in Athy, Co. Kildare, Ireland. 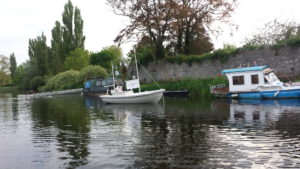